Sunday is a slow day in Antarctica. Typically is it a 'no fly' day; our pilots had agreed to fly if it was good weather, but the visibility was poor again this morning, so I had to find some amusement. 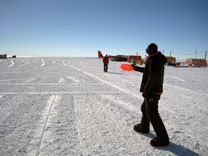 I killed some of the time out by having a lie in, then rattled round the GPS tent until we all got tent-fever and headed out for a game of frisbee-and-aerobie (at the same time). The use of a white frisbee was not ideal, but it was a lot of fun, and we only hit the (active) snow-plough once. 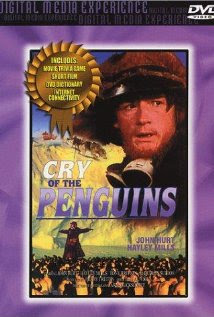 After lunch we all settled down to watch 'Cry of the Penguins'. How have I never heard of this film? Early 70's (going by the clothing) film with John Hurt being sent to Antarctica to count penguins. There is some fantastic footage (perhaps not the standard procedure for catching penguins theses days?), some great clothing and dancing, and a lovely ironic humour to it. The american contingent were highly amused by 1970's London in the first half!

After that I used up some of my excess energy digging snow for water, then once I'd filled all the buckets headed up the hill for some more snow action. After a quick penguin impression for Rachel (will try to get the video from her), I invented a new sport: snow rolling. Well, perhaps it isn't new, but certainly entertaining. The rules are simple: roll down the longest/steepest hill of snow that you can find. I managed a 9-rotation roll which left me pretty dizzy.

Upon my return I was accused of going insane. I do hope we fly tomorrow...
Posted by Pippa at 02:20