No news is good news

Things have definitely brightened up here in McMurdo. I decided not to post yesterday as I didn't actually do anything. Well, I read the proofs of my paper which is about to be published, but then fell asleep the whole afternoon. I think this was related to recovering from my cold rather than reading the paper because I woke up full of energy for the first time in a week.
Sunday has been good. Food has been excellent, with some of the highlights including fresh omelettes, a smoothie (not sure where that appeared from), grapefruit (twice), raspberry tart, edemame beans, roast beef with horseradish sauce, fresh salad with cranberry vinaigrette, and dark chocolate torte. And yes, I did sample all of these delights. 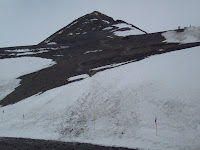 There was a craft fair this afternoon, which reflected the eccentricity of some of the people that live and work here, and then I headed out for a walk. Observation Hill had been taunting me all week as I shuffled around town feeling groggy. With my new-found energy I took a lovely walk up the hill, shot some high-quality video footage, and then ran down the scree as fast as I could. I'm feeling much more like a Pippa now :-)

Now, about that video. Duncan asked what you can see from Observation Hill, so it seemed easiest to film a panorama. Bear in mind that I am not the best photographer at the best of times, and it was a little windy, then hopefully you'll forgive the excessive amount of over-exposed snow which you have to endure in this 2-minute video. Unfortunately, you will have to watch it twice though, cos in the bit where I talk about hut point and the seals I was pointing the camera at the sky. However, you can see hut point just prior to the extended sky shot, so do go back and have a look!

I finished off the evening with a film (Running on Empty, highly recommended, although I'll warn you it did make me cry. Several times), and hopefully a last drink in the coffee bar before we fly. Estimated departure: 9am Monday morning.

Thanks for all the comments - it's great to hear from people back home. I'll be trying to keep the blog running from Byrd: I'll send the text out to Duncan and hopefully he'll post it up. You won't have to endure any more videos until I return to McMurdo...