Monday was a productive day - we headed out to a couple of the seismic sites to dig them out and bring them home because they have collected all the data that is required to determine the earth structure in that region. 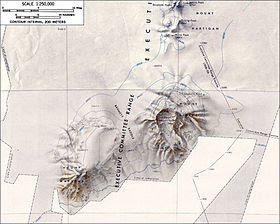 On the way back we got to fly right next to Mount Sidley and Mount Waesche, two volcanoes out towards the coast, which was really exciting - I got lots of blurry photos out of the window of the plane and a couple of really good ones. I use data from Mount Waesche in my modelling, so it was especially exciting to see it close up.

As we headed into Byrd something seemed a little wrong. Usually you can make out the sastrugi on the ground because we don't fly very high, but as we approached we could only see uniform white in all directions. Suddenly a couple of the runway flags appeared 10m below us to the left, with no sign of the flags on the right side of the runway. There was a loud noise as the pilot changed his mind about landing, and we climbed back up. Bother. The guys we'd left behind at Byrd were out waiting to greet us, and said they heard us, but never saw us! 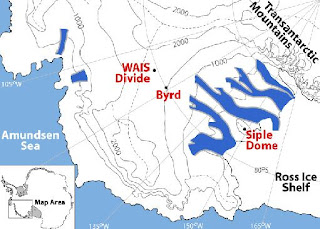 So we headed onto the camp at WAIS (West Antarctic Ice Sheet) divide, which is about 200km away, and is a similar size to Byrd. It's called WAIS divide because it sits right on the apex of the ice sheet; the point at which ice has to decide whether to flow towards the Ross Sea or the Weddell Sea. They were very welcoming - we'd arrived just in time for dinner, and got put up in a big heated tent overnight.

Every time we fly we carry survival equipment - enough to house 2 people per tent, and food and fuel for several days. So plan B, if we couldn't land at WAIS, was to land anywhere we could and wait until the weather cleared. Luckily it was good at WAIS - the pilots don't like camping out!

This morning was still foggy, although we did get to see a 'sun dog'; a ring around the horizon parallel with the sun caused by reflection through ice crystals. We also got a tour of the WAIS coring project.

An ice core is being drilled at the divide; they've got down to 3331m below the surface, and are about 130m from the bed. They are currently carrying out all sorts of measurements to calculate how far they are from the bed: they have to stop drilling before they hit the bed because if there is meltwater at the base of the ice they are not allowed to contaminate it with the fluid used to keep the borehole open - the ice is under great pressure at depth, and would soon close due to ice deformation if not held open by the pressurized fluid. The borehole itself is about 7 inches across at the surface.

The main aim of the project is to derive information from the ice core
itself: the thickness of annual ice layers, the age of ice at each depth, the chemical content of the ice at each depth, and hence climatic conditions at the time corresponding to that depth etc. However, they are tantalizingly close to reaching the base of the ice. If they were allowed to sample the bed we could potentially determine the last time ice in this area completely melted, leaving just open ocean (the bed is below sea level). How frustrating! However, this is one of the scientific goals of the BAS (British Antarctic Survey) project over at Lake Ellsworth - due to drill next year - so we will have to wait a little longer for answers...

Our holiday at WAIS divide was soon over. A break in the weather around lunchtime enabled us to scramble back to Byrd. It was good to be re-united with the rest of the Polenet team, and a replacement Twin Otter also made it in this afternoon. So once again we are all praying for a good forecast tomorrow.
Posted by Pippa at 01:12