Our plane did a few laps of the ice runway to scare us this morning, but then roared into the air. Noisy but uneventful flight with another smooth landing (C-130 in case you ask). After we landed at Byrd I was intrigued to see them open the back flap while we were still taxi-ing, but the reason became apparent: they just release all the cargo out the back and leave it in the middle of the runway! Saves a lot of lifting. 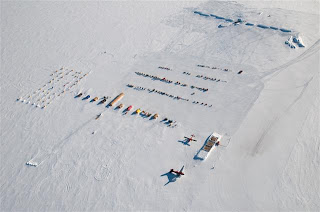 I've gone from a world in black and white, to a world in white. Squeaky snow here, lots of snow drifts due to a series of storms, but you don't sink in which makes it not too hard work. Another storm due tonight..

Pretty cold, but dry cold, and many layers of clothing keep you toasty warm. The galley and 'work' tents are heated. We live in 'tent city', I've moved into tent E4. Nice and snug, but bright yellow - hopefully I'll be so tired I'll be straight to sleep.

Still waiting for our twin otters (planes that we'll use to fly to the GPS sites), so a little more waiting, but it's much more peaceful here, and no dust - feeling better already. Better food too, speaking of which...
Posted by Pippa at 23:09