Apparently Thanksgiving was last Thursday, but we celebrate on the nearest Saturday. There is much excitement about the Thanksgiving Dinner later today, but the day started with the Turkey Trot. Oops, I accidentally entered a race..

When I heard about this, I didn't know whether to be excited or terrified. I haven't run since August, but couldn't turn down this opportunity. So I headed up to the BFC to hire out some 'yak-traks' to put on my trainers. I tested them out on a 50m jog, which constitued my warm up, and lined up with an assortment of people in bikinis (over a lot of thermals), hawaiian shirts, and turkey outfits. I regretted looking a little too serious in my lycra and windproof!

One of the turkeys shouted 'go', and there was a mad sprint up the hill. I thought that was a bit keen, so set off at a sensible pace for a 5km race in Antarctica. Although, in retrospect, I realised I didn't have much experience in this department. I'd heard the race was uphill all the way to the Scott Base sign, then downhill all the way back. Sounds simple. 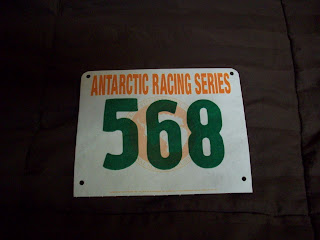 Halfway up the hill we turned into a sharp headwind, and several people in shorts and comedy outfits began to keel over. I plodded on with my sights set on some rather hidous lycra in front of me, keeping my buff tucked up over my nose in an attempt to keep breathing. We seemed to turn endless corners that were not on the race map that I'd seen, each of which revealed another hill! I think I had been first lady from the start, but a pretty waitress came trotting past on the steepest hill, so I determined to hold onto second - the waitress was looking pretty sprightly.

At last, I could see people running towards me, the halfway point must be near! A burst of energy carried me up to the turnaround sign, only to catch sight of a rather feminine-looking penguin hot on my heels. Bother. A bit of a tussle with the penguin ensued, but my yak-traks gave me lots of confidence on the descent, and I cruised back into town, and my lungs just about held out for a final sprint past the galley.

It turns out the penguin had competed for the US in biathlon in the 98 olympics, so I was right to be scared, but I apologised for getting a bit competitive on a fun run!

Racing in Antarctica was tough. My legs felt fine, but the cold air and the biting wind made my lungs want to burst, so I was very pleased it was only 5km. My time: 25:10, a personal best time on snow at least!!

Time for Thanksgiving Dinner :-)
Posted by Pippa at 14:13