Just over a week and a half ago I stepped onto a Dash 7 at Punta Arenas airport and headed south for Antarctica again. This time my destination was Rothera Research Station, a field base operated by the British Antarctic Survey. Life since then has been hectic and exciting… 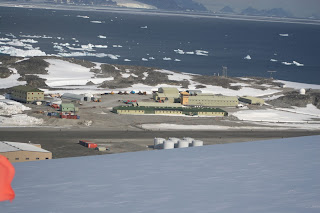 The first priority on arriving in Antarctica is to ensure that we are safe operating in this alien environment, so the first four days were a whirlwind of training, interspersed with trying to locate all my scientific equipment. The group I arrived with (a US team consisting of Erin Pettit, Ted Scambos and Chris Carr - here to study Scar Inlet Ice Shelf) had also all worked in Antarctica before so a lot of the training could be tailored to account for this, but there are lots of little things that are different between here and McMurdo, and it is always fun to practice crevasse rescue!! 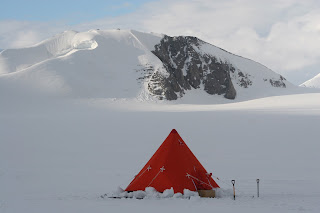 We were efficiently and entertainingly trained in station communications, first aid in the field, driving trucks and skidoos, flying in Twin Otters, and carrying out meteorological observations, along with all the skills you need to live out in the middle of nowhere on an ice sheet. You have to learn quickly, as you’ll be using all these skills for real very quickly. As an example, the Twin Otter pilots need to know the weather conditions anywhere they want to land a plane, so if you’re somewhere remote waiting for an Otter you’ll need to call up Rothera on the radio and deliver hourly reports on your local wind speed, wind direction, visibility, and cloud levels. Get it wrong, and your plane may not be able to get to you…

With training (just about) complete it was time to head into the field. My role while I'm down here is to install GPS receivers and seismometers at a number of locations along the Antarctic Peninsula. I’ll say a little more about the science elsewhere, but for now I’ll give you a flavour of why I’ve only just round to writing a blog post!

Before heading to the field I needed to locate around 40 different cargo items, shipped from three
different continents. I had to work out what they all were and how they fitted together (I’d never seen the majority of the kit before), upgrade some of the software, carry out a test-build of the systems to check everything worked, pre-build some of the bulkier items (e.g. a large metal frame to which some of the equipment is attached), track down spurious locally-sourced items (e.g. kit to guy down the equipment so that it survives the legendary Antarctic weather), work out which pieces had to fly out for the first batch of fieldwork, weigh all the kit (not helped when I broke the scales…), and get it packed efficiently for flying. Phew. 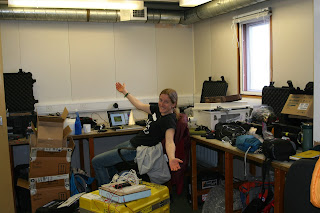 Photo: Chris with some of the chaos in our office - this office had been completely bare 12 hours earlier!

I’m still not sure how I managed everything in time, and am completely indebted to various people who showed me where things were/mended things I broke/helped build and carry things/and answered my frequent questions about circuit boards, batteries and toolkits. Somehow everything was just about ready in time, and we headed for Cape Disappointment, which was far from disappointing…