Cape Disappointment (65.535°S, 61.729°W) was the destination for my first task – installing a GPS receiver and a seismometer. The GPS receiver will measure the gradual deformation of the solid Earth as the Antarctic Ice Sheet shrinks (or grows), while the seismometer will record the arrival of seismic waves generated by earthquakes around the world. The data from both instruments will be used within the models that I work with in my ‘day job’ back in Durham.

It was a busy few days in the field as we had to set up camp for a team who will be staying at Cape Disappointment for a couple of weeks before starting on my install. This involved setting up and testing the HF radio, pitching some tents, and flagging out the 'runway' so that subsequent planes bringing in cargo could land as safely as possible. It was not a runway in the conventional sense; we simply marked out the tracks left by our Twin Otter in the snow.

Once all this was done it was time to check out the nearby outcrops to look for a suitable site for my instruments. The GPS receiver neeed to be attached to solid rock, while the seismometer neeed to be buried a couple of feet underground – finding somewhere to dig a hole was not too difficult as the outcrop mainly consisted of rubble, but finding some solid rock proved a little more difficult. I eventually found a decent site, but it wasn’t very close to the edge of the snow, so the evening was spent loading up ~330kg of equipment onto a sledge, dragging it about a kilometre to the outcrop, and then carry each of the items across the rubble to my chosen sites. Phew, hard work! 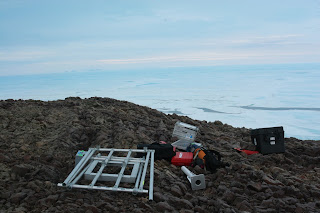 After a cosy night in a pyramid tent (the sleeping bag I am supplied with is amazing!) it was time to install the instruments. It was a long day, but we were blessed with light winds and bright sunshine so my fears of having to carry out some of the trickier tasks either wearing gloves or with cold hands were unfounded. 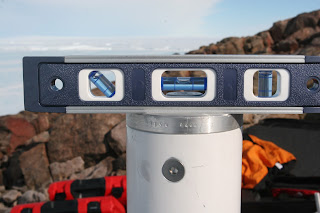 There was plenty to do, from manual tasks like drilling bolt holes so that the equipment can be secured to the rock, to more fiddly tasks like wiring up the instruments and checking they were successfully collecting data. I’d made myself a checklist of everything to be done, which ran to ~150 individual tasks (‘tighten bolts on X’, ‘plug Y into Z’ etc.). Most of the steps are common sense, but I didn’t want to risk missing one out as we won’t know whether the instruments have worked successfully until we return to service them next year. 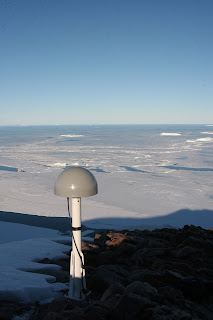 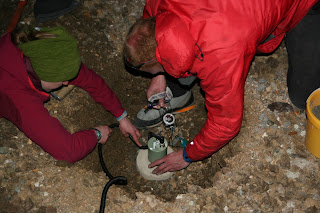 Photo: (left) GPS antenna with a stunning view across Larsen Bay. (right) Carefully placing the seismometer into its hole.

It was a long and tiring day, but as we completed the final few tasks it ticked over into my birthday, and I was rewarded with a stunning sunset across Larsen Bay. A pretty special way to celebrate my birthday! 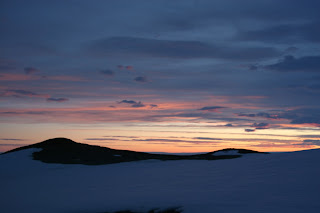